I honestly feel a little bit sorry for music critics stuck sifting nuggets of pyrite out of the neck-deep shit-slurry that is American pop music circa 2010. I can’t imagine going through the mental and aesthetic contortions required to pretend Ke$ha, Katy Perry, Robyn or Rihanna are truly the pinnacle of pop music, when Japan is just sitting…right…there, making everything produced in the West look like the product of a music therapy class in a traumatic-brain-injury ward.

Japanese pop is so much better than American pop it’s not even a contest. From the Steely Dan smoothness of Tomita Lab to the Vocodered chirp of female singing trio Perfume to the cybertronic awesomeness of Aira Mitsuki, theirs is a world of hyper-catchy anthems and soaring ballads, all polished to an ultra-high-tech sheen with none of the crappy-on-purpose decadence or pathetic attempts to sound “street” of US chart pop. J-pop is the music of benevolent alien visitors who only want to see us smile, and Ayumi Hamasaki is their queen. 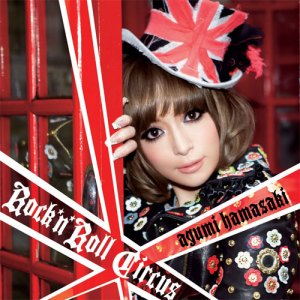 Hamasaki released her 11th album, Rock ’n’ Roll Circus (buy it from Amazon), on April 14 of last year; her 12th, Love Songs (buy it from Amazon), came out on December 22. The two albums are very different, but what unifies them is Hamasaki’s unique personality, which comes through even if, like me, you don’t speak a word of Japanese. Unlike many of her peers, she’s not pretending to be a chirpy little girl. Hamasaki’s voice has a dash of grit to it, even when she’s singing an ultra-lush, string-backed ballad that would make Celine Dion weep with envious rage. On more upbeat, hard-rocking numbers, she occasionally cuts loose with a yelp that almost cracks.

Rock ’n’ Roll Circus is easily Hamasaki’s hardest, weirdest, and most aggressive album. On its cover, she stares out of a red London phone booth, wearing a Union Jack-adorned top hat and a leather jacket covered in flower patches, and the music combines pounding techno and hip-hop beats with distorted, metallic guitars (especially on the thrashy “Microphone”) and an array of keyboard sounds, including a harpsichord and an organ. “Count Down” opens with screeching feedback and a surging piano chord, while “Don’t Look Back” is a bizarre Bollywood pastiche, with breakbeats and a one-finger synth line straight from a 1980s Tangerine Dream movie soundtrack, and “Sexy Little Things” is cyber-swing with chipmunk background vocals and an 8-bit melody battling crashing drums and house piano.

Beginning with its title and soft-focus cover image, Love Songs feels like a softer album than Rock ’n’ Roll Circus, but it, too, has its upbeat moments and bursts of metal guitar. “Thank U” sounds like Mexican electro-trance-pop group Belanova, while “Do It Again,” one of the few songs to feature any lyrics in English (the repeated line “Dance, dance, dance/Do it again/Sing, sing, sing/Do it again”) has the grandeur of an ABBA ballad. And speaking of grandeur, the two-minute interlude “Insomnia,” with its violin, booming kick drums and creeping synth line, should have Rick Ross on his already-overtaxed knees, begging to rap over it. Yes, it’s more ballad-heavy than Rock ’n’ Roll Circus, and has no guitar-dominated songs, but the power of a string-and-choir-bolstered opus like album closer “Virgin Road” (not to mention the live bonus track, “Seven Days War,” included on one of the three editions) is undeniable.

When Guns N’ Roses’ Chinese Democracy was released, I said that if you replaced Axl Rose’s vocals with Ayumi Hamasaki’s, you’d have almost the same album, and maybe even a better one. In 2010, she’s the reigning queen of more-human-than-human cyber-pop-rock, and we should all be her willing subjects.

[For a beginner’s guide to Japanese pop, including several of the artists mentioned in this review and more, buy Burning Ambulance #2.]