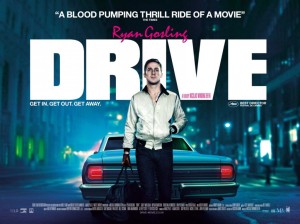 Quiet, kind, possessing a propensity to kick your fucking head in if need be, and sporting a bad-ass satin jacket with a big scorpion on the back, Drive‘s nameless hero, played by Ryan Gosling, is an anomaly on the current action movie landscape. The thing is, though, he doesn’t quite work within the niche of smart-dumb action flicks of the past that Nicolas Winding Refn‘s film fastidiously mines either. See, Drive isn’t chillwave applied to action movies, it’s a clever, contemporary riff on existential tough guy cinema, referencing the right seventies and eighties cult classics, building up the syllabus of nihilistic action flicks only to later reject their deathwish narratives.

Gosling’s jacket gets muddy, greased-up, and bloody like Warren Oates‘ white suit in Bring Me The Head Of Alfredo Garcia, but the Driver isn’t some transgressive loser; the tension-filled driving scenes owe a whole lot to Walter Hill‘s The Driver and perhaps, the slept-on Sylvester Stallone vehicle Cobra, but they tug the emotional weight of a love story behind them so it’s so much more than cheap thrills; the melodramatic ending of Michael Mann‘s Heat is teased at one point but cleverly twisted; Thief is another obvious, looming precedent and even if it ends on a similar, bummer low note, there’s a tinge of humanity and hope left once Drive‘s credits roll.

So yeah, plenty of nods to American rogue male cinema, but Drive is ultimately an affecting love story between the Driver, a stuntman and high-end getaway driver, his neighbor Irene (Carey Mulligan), her child Benicio, and in weird way, Irene’s just-outta-jail husband Standard (Oscar Isaac, in the movie’s secret best performance). This doomed relationship begins as a delicate, hand-holding flirtation, and shifts to a weirdly ambiguous act of love—or at least, the Driver’s distant, idealized understanding of love—once Standard gets out of jail and finds himself desperately in need of help.

People get nervous in Drive. They are not cool, calm, and collected. Things seriously go wrong. When the Driver confronts Nino, a Jewish crime boss played by Ron Perlman, who is low stakes in the grand scheme of things but can and will nevertheless murder anybody he needs to, the Driver’s voice quivers a bit, not sure what he’s doing as he delivers orders to a guy who you know, doesn’t like to take orders. “You’re not very good at this, are you?” Nino asks. The Driver, who just smashed a guy’s fingers with a hammer, timidly hangs up the phone. 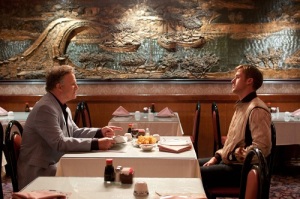 Albert Brooks‘ Bernie, a criminal who doesn’t seem to enjoy criminality all that much, says one thing and means another, not because he’s cunning but because he’s a complete fucking shitbag schlockmeister able to wiggle out of any and everything. The characters in Drive are all improvising—especially Bryan Cranston‘s Shannon, a loveable but doomed loser—and all of them stammer as they try to talk their way out of stuff, and pathetically run in the opposite direction of their fate. In Drive, crime doesn’t look cool, and violence feels like a tragic inevitability.

At the same time, Refn—well, he ain’t no pussy and so, he shares a love of pure style (heads exploding, cool fonts, propulsive synthesizer music) and an appreciation of physicality and grace under pressure found in Mann and Hill films but gone as of late, replaced by superhuman junk like Crank or the too-fast-to-follow action of those Bourne movies. The most affecting scene in the film occurs when the Driver finally kisses Irene in an elevator—Refn surreally slows the kiss down, enhancing the romance and teasing suspense—and then spins around, attacking an armed man sent there to murder Irene and her child.

The Driver stomps him until his face is a pile of mush; all the anger, fear, and frustration with this plan just not working out gets pounded into the thug’s head. But somehow, even when he’s literally busting heads, there’s a sense of something noble or at least, very human, to the character. The noir-like plot and all its mistakes, accidental murders, and the big bag of money, come from the Driver’s desire to do something nice. Refn and Gosling allow a glimmer of a “real human being”—as the film’s de facto theme from synth-pop group College goes—to burst through what at first looked like another stock, man-with-no-name character.