There is an unforgettable image by Burt Glinn called Three Graces, which depicts Joan Mitchell, Grace Hartigan and Helen Frankenthaler seated in front of a painting. Frankenthaler, the last of the three still alive after the death of Hartigan in 2008, passed away December 27, 2011. Frankenthaler’s career lasted more than half a century and is divided mostly into two movements: Cubism and Abstract Expressionism. She is best known for her paintings, but she was also a sculptor and printmaker. From this, her importance to modern art is evident, in particular relating to formalist theories. So it is interesting to note how Glinn has depicted Frankenthaler and the two other women: as mere muses (“graces”), rather than artists in their own right.

In a 1965 interview, Henry Geldzahler, then the Curator for American Art at New York’s Metropolitan Museum of Art, asked Frankenthaler, “How do you feel about being a woman painter?” She replied, “Obviously, first I am involved in painting not the who and how. I wonder if my pictures are ‘lyrical’ (that loaded word!) because I’m a woman. Looking at my paintings as if they were painted by a woman is superficial, a side issue, like looking at Klines and saying they are bohemian. The making of serious painting is difficult and complicated for all serious painters. One must be oneself, whatever.” 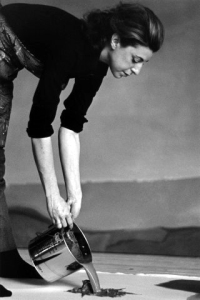 Clearly, the dominant view of the time was to see female artists as rare, especially in the male-dominated movement of Abstract Expressionism. But decades earlier, female artists were world famous; for example, Surrealists like Remedios Varo, Frida Kahlo and Lee Miller, to name a few. And yet Frankenthaler, a second-generation Abstract Expressionist, was mostly influenced by men. From Jackson Pollock she adapted the method of pouring paint directly onto the canvas as well as laying the canvas on the ground to work on and the use of large-scale canvases. She also trained under Hans Hofmann, like many of the other painters of abstraction of that time. Eventually, Frankenthaler herself influenced the Color Field movement and painters like Kenneth Noland and Morris Louis, with her soft-edged stain method of painting. 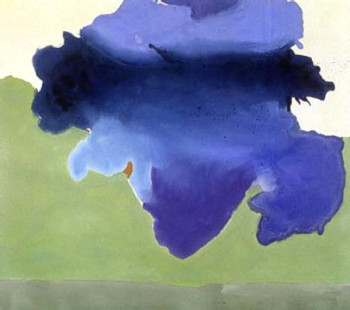 Frankenthaler’s The Bay (1963) is an excellent example of her use of blocks of colors, floating on the canvas. An amorphous shape with different layered tones of blue pops out from the canvas, flanked by patches of warm white at the top of the image and a smooth, grassy green flowing across the bottom. There’s also a darker band of almost grayish green forming a sort of border at the very bottom. Her works mostly convey a serene feeling of nature, while displaying a play with light and shadow and color, thoroughly unlike the art of her male counterparts, who created aggressive, menacing and dark canvases. This kind of dichotomy set her oeuvre apart when she arrived at her style and technique. It’s also what made her legacy influential, making her forever part of art history.