Supergroups are by their very nature meta. When members of multiple established bands join forces in a new effort, the instinctive reaction is to compare this work to the work of the “parent” groups. Furthermore, more latitude is granted to these collectives than to the work of unknown bands; “we” go in wanting to like what we’re going to hear, with expectations stoked by our knowledge of the members’ previous work. Some groups cater to these feelings (Derek and the Dominos, a group featuring guitarists Eric Clapton and Duane Allman, offered long songs full of bluesy guitar soloing), while others, particularly projects arising out of the post-punk and “alternative” scenes of the 1990s and 2000s, gleefully flout them.

The first OFF! release was First Four EPs, a 16-track box of 7″ vinyl (the EPs were never available separately, making the whole thing a mere exercise in format-novelty, but whatever) issued in December 2010; in February 2011, the CD version arrived. (Two different bonus tracks were available if you purchased the digital-only version from iTunes or eMusic.) The shortest song was 35 seconds (“Full of Shit”); the longest was 1:35 (“Poison City”). They were quick blasts of classicist punk rock, with the guitar a distorted roar, the bass playing more of a second-guitar role, the drums all snare and cymbals, and the vocals a desperate mix of sneer and scream. During his time fronting Black Flag and the Circle Jerks, Morris’s lyrics mixed dark humor with a relatable frustration and rage. With OFF!, the humor had mostly faded away, and the rage felt more bitter, but a heartfelt tribute to the former leader of L.A. punk-blues band the Gun Club (“Jeffrey Lee Pierce“) proved that the band’s music was more than a set of reflexive gestures in an obsolete style—this was Morris and company proving that hardcore could still mean something, especially when made by (and, by implication, for) people old enough to have been around at the beginning. 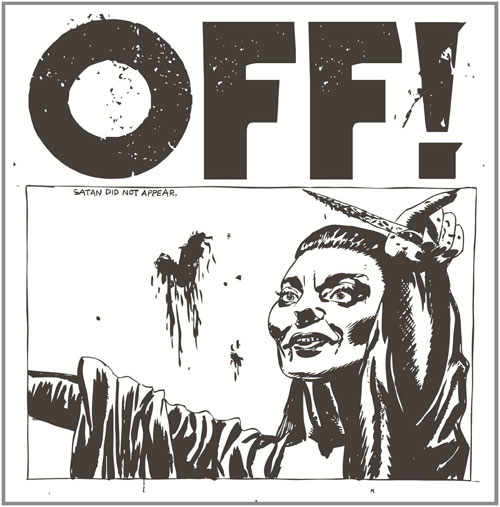 The self-titled second album (buy it from Amazon) is neither a refinement nor an expansion of the paradigm established (or perhaps reiterated) on First Four EPs. Once again, we get 16 songs in as many minutes. The energy level is just as high as it was in 2010, Coats’s guitar is as indebted to Black Flag founder Greg Ginn as before (without the touches of metal and free jazz that made that band’s records so terrifyingly original), McDonald’s bass is a midrange roar, and Rubalcaba’s drums are as hammering as ever, yet surprisingly intricate at times. The big difference is the lyrics. Where on First Four EPs Morris was railing against hypocrisy and pollution, and occasionally mourning the dead, now he’s gone meta. A few songs are aimed at unnamed folks who’ve disrespected OFF! on the road or done other things the singer views as bad for “the scene,” and one is a trip down punk rock memory lane, all the way back to a legendary Black Flag show at Polliwog Park in Los Angeles, 1978. There are still plenty of basic blasts of white-hot rage, but these navel-gazing lyrics threaten to turn the whole thing from a vital new band into the nostalgia exercise it didn’t feel like the first time around. And Morris’s nasal, barking voice, mixed extremely high, makes it almost impossible to ignore him. Which is of course the point.

Still, on a purely musical level, OFF! the band and OFF! the album remain extremely potent. These lyrical missteps are minor and don’t at all make up the majority of the record. And while it would be nice if OFF! songs had hooks as memorable as those Black Flag and the Circle Jerks wrote (if you’re of a certain age, you can probably hum “Six Pack,” “Nervous Breakdown,” “Coup d’Etat” or “When the Shit Hits the Fan” right now), listening to their work nevertheless provides a jolt of raw adrenaline few bands of any age can equal.

Here’s the video for “Wiped Out,” from the new album: