Since the dawn of the millennium, Branford Marsalis‘s quartet has been steadily turning out albums that, without ever making landmark statements, nevertheless push restlessly against the strictures of modern jazz. In a way, this album, which introduces new drummer Jason Faulkner, is a bookend to the group’s first release, 2000’s Contemporary Jazz, which introduced pianist Joey Calderazzo to the lineup following the death of Kenny Kirkland, who’d worked with Marsalis (and his brother Wynton) since the 1980s. Like Contemporary Jazz, its title—Four MFs Playin’ Tunes—is an emphatic statement of purpose not unlike Ornette Coleman‘s This is Our Music or Thelonious Monk‘s Monk’s Music. (Buy it from Amazon.) 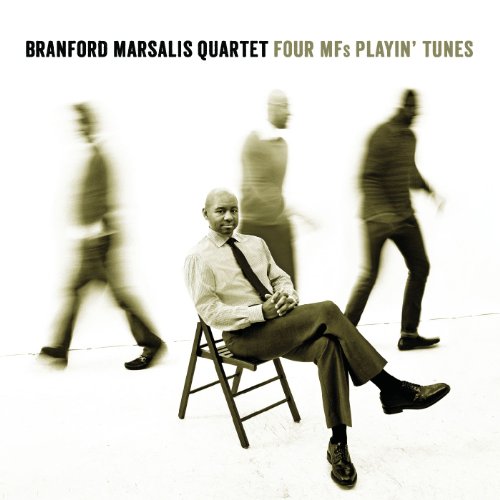 The actual music offers a similar line-in-the-sand challenge to the listener. Four MFs begins with three straight pieces featuring Marsalis on soprano saxophone, an instrument that can ruin a jazz record quicker than any other (even the bagpipes are better—seek out the work of Rufus Harley). Still, it must be said that Marsalis’s voice on the soprano is instantly identifiable, and more enjoyable than many of his squawking, squiggling, circular-breathing peers. And the band behind him is terrific. Calderazzo is a McCoy Tyner-ish pianist, spinning out baroque swirls of notes with a lightning-fast right hand; Eric Revis‘s bass is thick and human, always bolstering and almost never intruding; and Faulkner is a ferocious drummer, slamming the kit around with the fury and boundless energy that only a 20-year-old can muster. But for all the ballistic power he displays on burnout tunes like “Whiplash,” he’s just as willing and able to pull back and sensitively accompany a ballad like “As Summer into Autumn Slips” (another soprano tune, but, again, a forgivable one given the beauty of Marsalis’s handling of the melody).

When Marsalis plays the tenor, he loses—or more accurately, sheds—some of his individuality. He’s always been a chameleonic player, shifting from a Charlie Rouse-like burr to a thick, Sonny Rollins-esque roar to a Wayne Shorter murmur, and he takes the opportunity to do some of those things here, as the band plays Monk’s “Teo” (the original of which featured Rouse) and the standard “My Ideal,” which Rollins recorded on 1956’s Tour de Force and 1979’s decidedly weirder Don’t Ask. It’s at these moments that the album starts to really live up to its title, and sound like four dudes in a room, just playing songs they’ve loved for years without regard for posterity or feeling the need to Move Jazz Forward. And along with “Whiplash,” which damn near brings on the titular condition, they’re the moments when, despite the quality of the original compositions (two each by Marsalis, Calderazzo and Revis), Four MFs Playin’ Tunes is most enjoyable. This is a ridiculously talented and skillful band, with a degree of interplay among its members (even newcomer Faulkner, though he still seems to be learning to contain himself a little and not explode all over the place all the time) that makes everything they play a pleasure to hear—and they seem to believe that’s more than enough. Marsalis has been dismissive in the past of players who have “a concept,” averring that writing beautiful melodies, playing them well, and extemporizing on them deftly is concept enough. This album proves that he’s mostly right.