Alto saxophonist Darius Jones is back, and once again, he’s playing with a totally different set of musicians than on any previous record. (See the first paragraph of my review of his last album for a rundown of how each of his prior releases has differed, in both personnel and sound, from the others.) This time, as with Little Women, he’s not the leader but part of a collective. Grass Roots, like Little Women, is a two-saxophone group, but where that outfit offers screaming electric guitar and hammering drums alongside tenor and alto, this one pairs Jones’s alto with Alex Harding‘s baritone, and a rhythm section composed of bassist Sean Conly and drummer Chad Taylor. 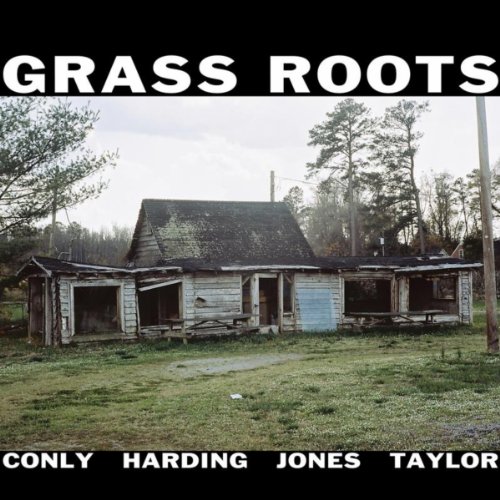 This instrumentation is gutsier and more organic than the other group’s, and the compositions have a feel all their own. Everyone contributes to the writing—Jones offers the first two tunes, “Hotttness” and “Lovelorn,” while “Schnibbett” is by Conly, “Flight AZ 1734” is by Harding, and Taylor contributes “Whatiss”; there are also two collective pieces, “Ricochet” and “Hovering Above”—and their interactions are physical and almost familial. Jones’s solos are harsh, sometimes shrieking in a post-Albert Ayler manner. He occasionally seems to be speaking glossolalia through the horn. Harding, meanwhile, is a slightly more subdued player who nevertheless appears to enjoy the baritone sax’s ability to sound like some sort of prehistoric farting animal. His solos have a huffing-and-puffing quality at times, but with a fluidity and grace that keeps them cohesive; he’s not playing a string of phrases, he’s exploring a single long-form idea. And when the two pair up for the sprinting melody lines that launch many of these pieces, it’s honestly one of the most exhilarating sounds in jazz circa 2012. Conly and Taylor are a loose but keenly attuned rhythm section, locked in with each other and swinging like…the parts of a bull elephant that swing hardest when he’s at full stampede.

The compositions, deceptively simple, allow the group to express themselves in a variety of moods and contexts. “Flight AZ 1734” is a headlong stampede that sounds like a variation on Charles Mingus‘s “Hora Decubitus,” from Mingus Mingus Mingus Mingus Mingus; “Lovelorn,” on the other hand, lives up to its title, Jones’ romantically devastated solo coming off like Ayler pleading with an ex-girlfriend in a phone booth at midnight. On the nearly 11-minute “Whatiss,” Jones plays a solo composed of longer-than-usual notes, slow keening phrases, as Harding repeats a rumbling phrase over and over, like a second bassist. Meanwhile, Conly and Taylor construct a clockwork groove that’ll make you nod your head so hard your fillings might come loose. Then, when the baritone player’s own solo erupts, it’s a storm of John Coltrane-esque repeated flurries of notes, like a Newfoundland gnawing a cow’s thigh-bone.

As awesome as the album’s first six tracks are, though, it’s the final piece, “Hovering Above,” that’s the most notable, if only because it sounds nothing like any of the others. A nearly nine-minute exercise in drones, gurgling(!) and breath control, it hisses and whispers along with almost no input from the rhythm section save some bowing and scraping, and its eerieness puts everything heard before into an entirely new light. Without it, this album would have been a gutbucket collection of howl-at-the-moon/stomp-the-floor exultation; with “Hovering Above” as coda, it’s revealed as a multifaceted and carefully considered record that also happens to muster an almost convulsive energy. (Buy it from Amazon.)