Today would have been saxophonist John Coltrane‘s 87th birthday, had he not died of liver cancer in 1967, at 40. In the wake of his passing, his wife Alice arranged with Impulse! Records to release previously unheard music recorded in the final years of his life. Two of these albums—Cosmic Music, from 1968, and Infinity, from 1972—are among the most controversial titles in the Coltrane catalog, but they’re also among the best of his late-period work.

In the summer and fall of 1965, Coltrane began radically reshaping his music, and the players with whom he made it. On albums like Ascension and Meditations, additional musicians joined the core ensemble of pianist McCoy Tyner, bassist Jimmy Garrison and drummer Elvin Jones—most notably saxophonist Pharoah Sanders and drummer Rashied Ali. By early 1966, both Tyner and Jones would depart, and Alice Coltrane would join the group on piano. This quintet (the Coltranes, Sanders, Garrison and Ali) would be a touring and recording ensemble for the last year of John Coltrane‘s life. They would record some of the most explosive music of his career. But it was not always his best music. Expressions and Stellar Regions, both made with the final quintet but not released until well after Coltrane’s death, often feel flimsy and formless. There’s power in his and Sanders’ blowing, and the feeling that they’re after something greater than themselves is occasionally palpable, but the raw and improvisatory nature of the music also renders it evanescent and ephemeral. 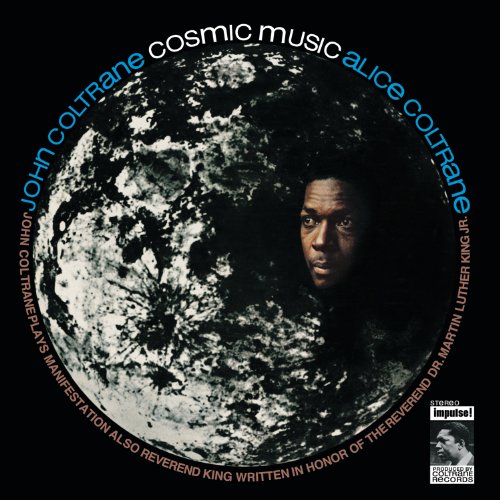 Cosmic Music (buy it from Amazon) contains four tracks, only two of which feature John Coltrane. “Manifestation” and “Reverend King,” recorded in San Francisco on February 2, 1966, find him working with the final quintet and Ray Appleton as an added percussionist. The other two tracks, “Lord, Help Me to Be” and “The Sun,” are performed by Alice Coltrane with Sanders, Garrison, and drummer Ben Riley, and were recorded at her home studio on January 29, 1968. (A third track from this session, “Ohnedaruth,” opens her 1968 album A Monastic Trio.) As a result, the album has a whiplashing sort of feeling. “Manifestation” is a fierce, nearly 12-minute blowout reminiscent of the first half of the Meditations album, with the additional fire and fury of the group’s live shows as heard on discs like Live at the Village Vanguard Again!, Live in Seattle, and Live in Japan. “Reverend King” begins moodily, but soon erupts into another extended forest fire of sound. “Lord, Help Me to Be” and “The Sun” are much mellower and more structured—the former is a gospelish blues, with a certain amount of overblowing from Sanders, but not that much; generally, he keeps himself in the burly, heart-on-sleeve territory of Archie Shepp during his solo time, and behind him the band stomps and grooves. And Alice Coltrane‘s piano work is simply beautiful. Melancholy but powerful, she sounds like the grieving widow she must have been at that point, less than a year after her husband’s death, and yet her music has force and gravity. The album’s final track, “The Sun,” is preceded by a snippet of John Coltrane reciting the phrase “May there be peace and love and perfection throughout all creation, o God” three times; then, Alice leads the trio, minus Sanders, through a meditative ballad that’s the perfect ending for an album that bids farewell to her husband, and launches her as a solo artist (A Monastic Trio would follow it into record stores).

The release of Infinity in 1972 (buy it from Amazon) was greeted with shock and even fury in some quarters, for the simple reason that Alice Coltrane had taken previously unheard recordings by her late husband—including two, “Peace on Earth” and “Leo,” from the same February 1966 session that yielded half of Cosmic Music, and two others from June and September 1965 featuring the saxophonist’s classic quartet—and added strings and additional instrumentation, including overdubbing Garrison’s bass work with that of Charlie Haden. But it’s a fantastic album, because Alice Coltrane was a brilliant arranger. The strings and harp that open the album, adapting the melody of “Peace on Earth” and expanding it to a horizon-spanning vista of sound, grant it a majesty that John Coltrane himself, no matter how full and rich his tone was, could not achieve with saxophone alone. And when he begins to solo, the orchestra becomes more free, but never competes with him—it’s always about creating a context for what he’s doing. Perhaps not the one he envisioned when he recorded his performance, but the results are undeniable.

The album continues with “Living Space,” on which Coltrane’s soprano saxophone is also overdubbed (this track, minus the strings, can be heard on a compilation of the same name), followed by “Joy,” which is probably the piece on which the seams show most clearly. The strings play for nearly a minute before Coltrane enters, and what they’re playing is based on the initial melody heard from him, but he’s in eruptive mode, so it’s difficult to balance his torrents of sound with the shimmering clouds Alice conjures. Jimmy Garrison gets an unaccompanied bass solo, which is great (note: I originally had marked this as a Haden solo, but a commenter corrected me), but when the rest of the music comes back in, it’s clear it was more of a digression than anything else. Finally, we get “Leo,” on which the editing is once again extensive—John Coltrane‘s and Rashied Ali‘s playing is from one session, while Alice Coltrane‘s and Charlie Haden‘s are from another and the strings come from a third. But it all works. Her piano solo is nearly as unfettered as her husband’s saxophone work, and at about the six-minute mark she turns to the electric organ, while Haden fills in the bottom with bass drones Sunn O))) could admire. When John Coltrane is due to return, he’s first heralded by the strings, jabbing sharply in a Bernard Herrmann-esque manner; they continue behind him like that until the piece, and the album, finally crash to an end. Infinity is simply a terrific musical work, sweeping and glorious—a major piece of the Coltrane (John and Alice) corpus.